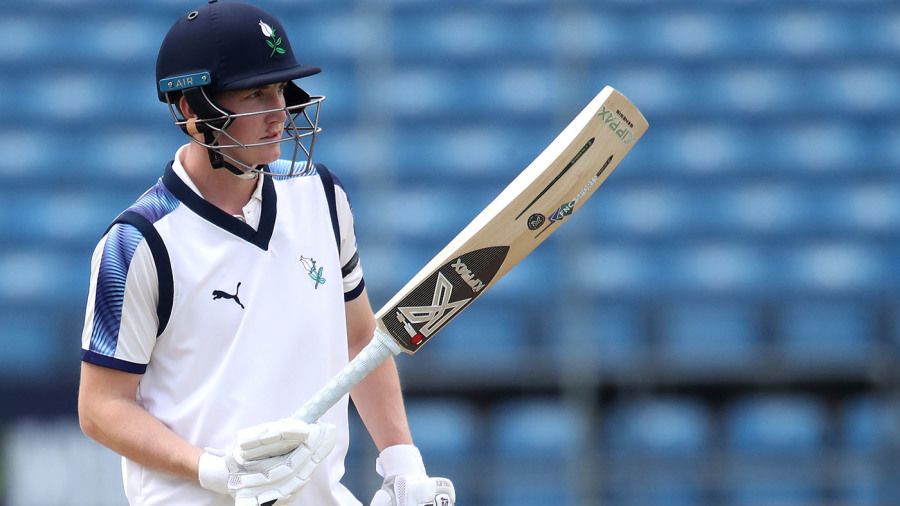 Yorkshire are closing in on a resounding Bob Willis Trophy victory over Leicestershire at Emerald Headingley, but it will not be enough for them to reach the Lord’s final later this month.

The White Rose county’s fate was sealed just before tea on day three when they failed to reach 400 in their first-innings reply to Leicestershire’s 124 – bowled out for 252. They needed to post 400 in order to give themselves a chance to reach 90 points in the North Group, a mark that is likely to secure a place at Lord’s.

Leicestershire then closed on 78 for 5 from 26 second-innings overs (16 were lost at the end of the day to bad light), and victory here could still see the hosts top the North table. But the Lord’s finalists will be Essex from the South and either Worcestershire or Somerset, who are locked in battle at New Road, from the Central.

Yorkshire’s bid for 400 and a 24-point haul was undermined by collapses at either end of their first innings in overcast and bowler-friendly conditions.

They started day three on 36 for 2 and quickly slipped to 46 for 4 as Will Fraine and Tom Loten played loosely at left-arm quick Dieter Klein and were caught at mid-on and behind respectively. But Harry Brook, Jonny Tattersall and standout performer Jordan Thompson – he later claimed three wickets – all hit half-centuries and fashioned a recovery either side of lunch which raised hopes again.

Brook, particularly fluent on the way to 53 – an on-drive against Ben Mike will not be forgotten in a hurry – shared 75 with Tattersall before lunch. Tattersall later added 116 with sixth-wicket partner Thompson, helping to secure a first batting point and taking them towards a second.

However, when the previously wayward seamer Mike found his range and uprooted wicketkeeper Tattersall’s off-stump for 71, that left Yorkshire at 237 for 6 in the 65th over of their innings and sparked a damaging flurry of wickets.

The hosts lost their last five for 15 runs in only 29 balls, with Thompson lbw for 62 as one of three wickets for offspinner Arron Lilley, who also removed Matthew Fisher and Duanne Olivier. When a diving Sam Evans brilliantly caught Ben Coad at point off Mike in the 69th over, that ended Yorkshire’s silverware hopes.

Yorkshire can point to an encouraging campaign that has seen the emergence of young players such as allrounder Thompson, who posted his second half-century in five games and took his tally of wickets to 13. But they will want to strengthen that view with a third win – added to two draws – that should see them top the North given pre-game leaders Derbyshire’s struggles against Lancashire at Liverpool.

And, after tea, they made the ideal start to Leicestershire’s second innings when Coad trapped Sam Evans lbw to leave the score at 4 for 1 in the third over.

Thompson’s seamers then accounted for three wickets in as many overs as Leicestershire toppled to 47 for four in the 18th. Hassan Azad and Harry Dearden were both caught behind in the 14th, the former down leg-side, as the score fell to 35 for 3. Then, in the 18th, on-loan Essex batsman Rishi Patel was caught at cover by Jack Shutt.

Fisher also struck to get Harry Swindells caught behind in the 22nd over. There was no play beyond 5.40pm, and Colin Ackermann and Lilley will begin day four on 23 and 10 respectively.