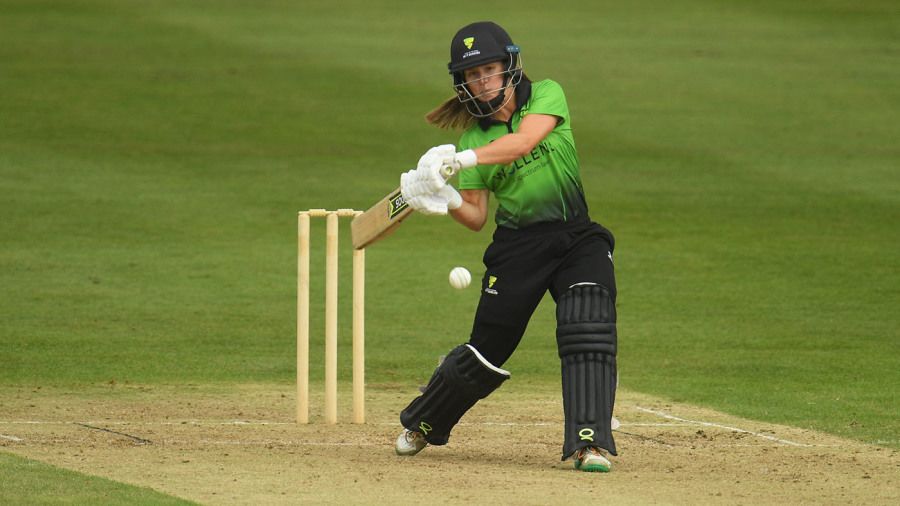 In-form Sophie Luff fashioned a brilliant hundred to guide Western Storm to a comfortable seven-wicket Rachael Heyhoe Flint Trophy triumph over South East Stars at the Bristol County Ground. Chasing a target of 213, Storm’s captain top-scored with 104 not out and shared in a match-winning stand of 162 with Georgia Hennessy for the third wicket as the hosts cruised to victory with 23 balls to spare.

Hennessy excelled with bat and ball, the 23-year-old Worcester-born allrounder claiming 3-40 in 10 overs before posting an assured 86, her highest score of the season so far.

Stars won the toss and Kirstie White and Maxine Blythin both registered patient half-centuries on a difficult pitch. But neither was able to go on and make a really decisive contribution, and Stars’ total of 212-9 in 50 overs never really looked like being enough once Hennessy and Luff began to move through the gears.

Even without their England internationals, Storm have now won three out of four games and are the only side still in with a realistic chance of overhauling South Group leaders Southern Vipers and making the final at Edgbaston later this month.

Storm’s reply suffered an early setback when Fi Morris was bowled for a duck by Tash Farrant without offering a shot to the third ball of the innings. Unperturbed, Lauren Parfitt and new batsman Luff took full advantage of the fielding restrictions to add 49 for the second wicket. The advent of spin eventually proved Parfitt’s undoing, the Welsh international hoisting a catch to Capsey at deep midwicket on 18. But Luff remained relentless in her quest for runs, working the gaps to scamper ones and twos, while punishing any lapse in line and length when the bowling strayed.

Hennessy proved the perfect foil, as five of her first six scoring shots went to the boundary. Striking the ball cleanly, the allrounder refused to allow the spinners to settle during the middle part of the innings, Alice Capsey, Hannah Jones and Megan Belt resorting to considerable variation in a bid to subdue her.

Luff relied upon nimble footwork to counter the slow bowlers, helping herself to half a dozen boundaries en-route to a workaholic 84-ball half-century. It was her third score of 50 or more in four innings since moving up the order this season. Hennessy required 22 balls fewer to attain the same landmark.

Luff’s perfectly-paced innings was adorned with 11 fours and a six and she went to three figures from 132 balls, while Hennessy accrued 12 boundaries in a forthright knock which spanned 106 deliveries. Victory was already assured when Hennessy was bowled by Hannah Jones in the 46th over.

Stars elected to bat but found the going far from straightforward on a characteristically slow Bristol pitch. New-ball pair Lauren Filer and Alex Griffiths sent down 13 wides in the first 10 overs but, when they did find the right line, both troubled the batsmen. Filer made the breakthrough in the sixth over, bowling Capsey for 3 with a delivery that nipped back.

Aylish Cranstone looked to be assertive, in scoring 17, only to see her off stump uprooted by Hennessy as Stars slipped to 62 for 2 in the 15th over.

Salvation was at hand in the form of the obdurate White and Blythin, who dug in and demonstrated good shot selection, clever placement and quick running between the wickets in a productive third wicket stand of 51 in 10 overs, which served to put pressure back on the bowlers. The dominant force, White proved particularly effective off the back foot, collecting eight boundaries on her way to a chanceless 75-ball half century.

Bu just at the point where Stars were threatening to lay the foundations for a really big score, Emma Corney effected a crucial double-intervention, running out White for 50 with a lightning-quick pick-up-and-throw from point and then finding her way past Amy Gordon’s defences to dismiss the new batsman for a first-ball duck and reduce the visitors to 113 for 4 at the halfway point of the innings.

Thereafter, Storm reasserted control, Corney conjuring a tidy return of 1 for 23 off six overs, bowling in tandem with Devon team-mate Stephanie Hutchins, who sent down 10 overs unchanged for 1 for 27. Effectively tied down and frustrated, Tash Farrant scratched 10 runs from 38 balls before looking to drive a straight one from Hutchins and losing off stump as Stars slipped to 147 for 5 after 36 overs.

In contrast, Blythin’s patient approach paid dividends, the Kent player finding the gaps and running hard between the wickets to keep the scoreboard ticking over. Having played second fiddle to White, she served as senior partner in a restorative stand of 40 for the sixth wicket with Jones, who raised 28 from 30 balls before lifting Griffiths to long-on.

While those at the other end succumbed to death bowlers Hennessy and Griffiths, Blythin went calmly about her business, compiling 50 from 88 balls with three fours. Having reached that landmark, she promptly chipped a slower ball from Griffiths to cover, but only after ushering her team to a respectable total.