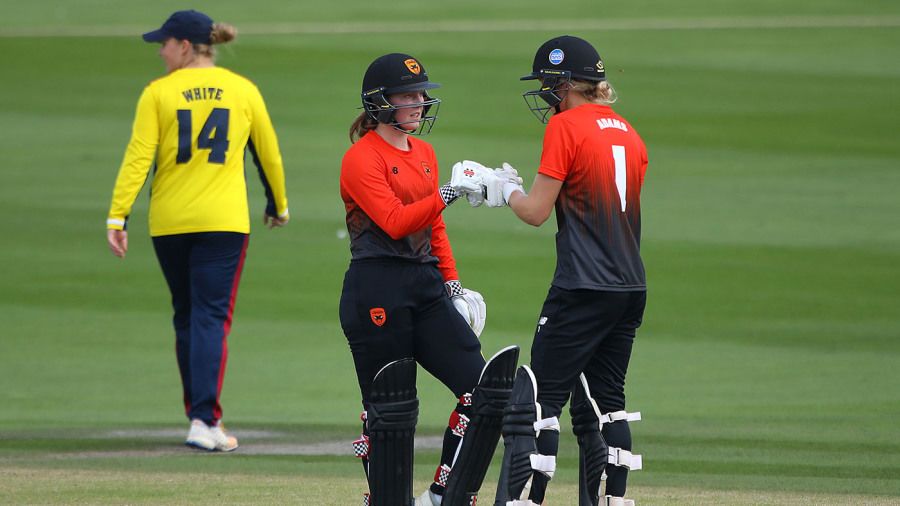 Southern Vipers remained on course for the final of the Rachael Heyhoe Flint Trophy when they made it three wins out of three by defeating South East Stars by 111 runs at Hove.

The Stars, chasing a target of 210, never came to terms with a difficult surface but kept themselves in touch until they suddenly fell away, losing five wickets in seven overs for 11 runs halfway through their 50-over allocation. It was their second defeat in three matches.

They were 61 for 2 in the 20th over, slightly behind the rate but still very much in the match with wickets in hand, when the game turned with a stunning piece of fielding from Providence Cowdrill.

The dangerous Maxine Blythin, sensing the need for acceleration, drove Charlotte Taylor powerfully but uppishly and was stunned to be caught by a diving one-handed catch by Cowdrill at mid-off.

Then Susie Rowe jumped down the wicket to drive but only succeeded in chipping the ball to mid-off, where Ella McCaughan took a simple catch. In the following over Aylish Cranstone, who had held the innings together with 28, was run out as non-striker when a drive was deflected onto the stumps by the bowler Tara Norris. Then Tash Farrant and Rhianna Southby were run out in successive overs and the game was up for the Stars.

The Vipers might have expected to score more than their 209 for 8, especially after openers Georgia Adams and McCaughan had set a solid platform with a first-wicket stand of 84 in 21.3 overs.

But, until the end of their innings, they struggled to lift their run-rate above four an over. They lost wickets just as partnerships were beginning to develop and found no-one to play the commanding middle-order innings to accelerate the run-rate, not that it was needed at the end of the day.

In mitigation, they were batting on a used wicket, which appeared to get slower as the day progressed. And the bowling and fielding by the Stars was impressive. Captain Farrant led the way, her bustling left-arm seam bowling taking two wickets for 28 runs in ten overs. She was well supported, particularly by Alice Capsey, who is better known as a right-hand bat but who has also been transformed into a useful spinner by the former Hampshire slow left-armer Rajesh Maru.

Adams, the daughter of former Sussex captain and Test batsman Chris Adams, followed her recent 55 against Western Storm with a 69-ball 44, with three fours, while McCaughan, only 17, made 50 from 81 deliveries, though she hinted at a brisker tempo when she struck three fours in the fifth over of the match, bowled by Eva Gray.

After that, Maia Bouchier, with 28 off 35, and Charlotte Dean, with 28 from 44, threatened to play major innings but both got out when well set and the Vipers only got the 200 up in the 49th over.

The Legal and Political Issues