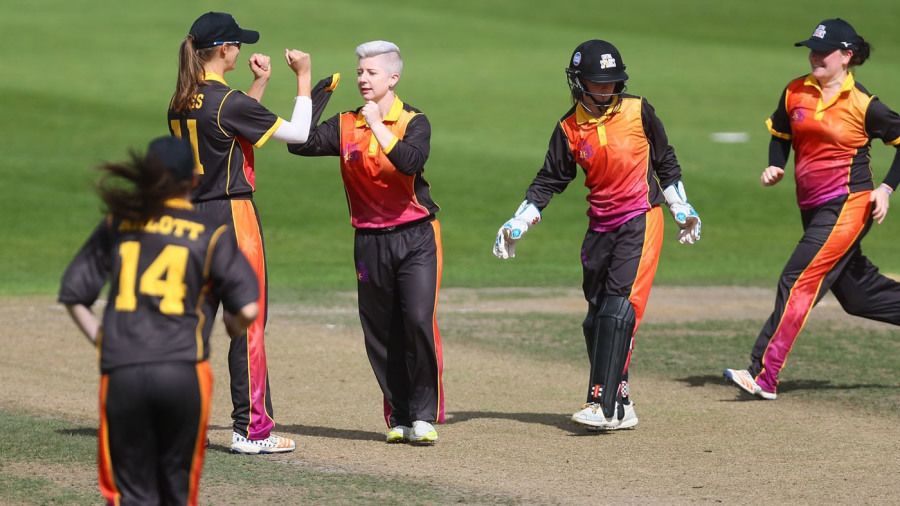 Central Sparks emerged victorious against North West Thunder by eight wickets, chasing down 167 in 39 overs at New Road thanks to four wickets from Clare Boycott and Eve Jones making 90 to see her side over the line.

The emphatic victory puts Sparks second in the North Group, with Thunder sitting in third place

After losing the toss, the Sparks bowlers enjoyed a strong all-round performance, picking up wickets at regular intervals and not letting the visitors’ run rate get ahead of them. When the batters’ turn came, they ensured Thunder didn’t get back into the game, and their positive play in the middle secured the win.

Thunder made a steady start to their innings, putting on an unbroken opening partnership of 53 from the first 17 overs. However, Sparks turned their fortunes around and took three wickets for nine balls. Firstly Anisha Patel trapped Laura Marshall lbw for 25, and Boycott followed by taking two wickets in as many overs, bowling Laura Jackson for 1 and, next over, Geogie Boyce edging behind for 27.

Thunder settled and boundaries began to flow as they upped their intent heading to back stages of the innings, although once again Sparks managed to take regular wickets.

An amazing direct hit from skipper Jones dismissed Ellie Threkeld for 22 after a mix up in the middle between herself and Brown, pushing for a single that wasn’t there.

Another three quick wickets followed for Sparks, for just three runs. Thea Brookes came into the attack, making an impact, dismissing Natalie Brown for 27, caught behind, and trapping Olivia Thomas lbw for 0. Boycott got the third, bowling Liberty Heap who went without scoring.

Rebecca Duckworth and Alice Dyson put Thunder back into the game in the last 10 overs, taking their score past 150. Their partnership of 35 was broken by Boycott, getting her fourth wicket, when Dyson was caught for 21, with Thunder posting 166.

Sparks made a positive start to their chase, as openers Gwen Davies and Jones brought up their 50 partnership in the 12th over, as they continued to frustrate in their dominant opening partnership.

Jones passed her half-century in the 24th over, coming from 82 balls, as the 100 stand from the openers came in the same over. The partnership flourished as the innings progressed, reaching 114, but Thomas found a breakthrough, trapping Davies lbw for 37.

Marie Kelly came in and continued her great form alongside Jones, who – on the brink of victory – was run out.

The United Arab Emirates has announced its first female astronaut