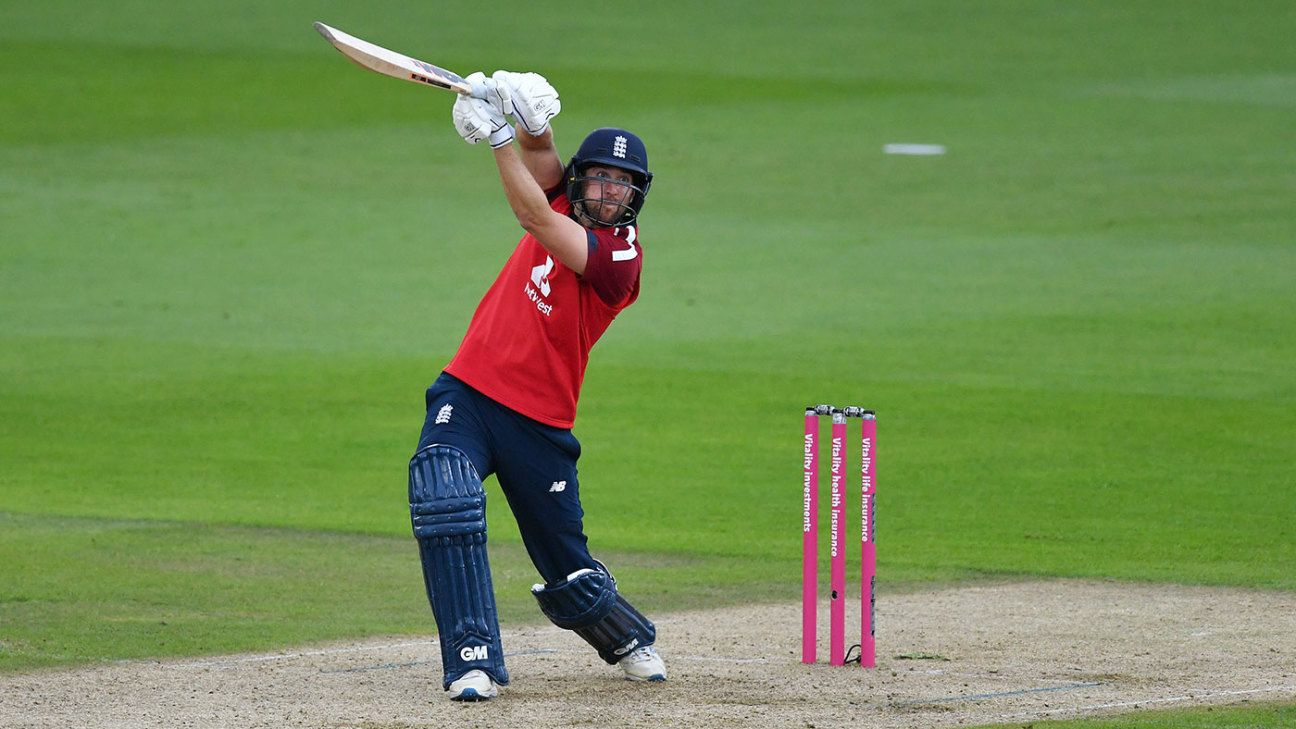 Fifteen games into his T20I career, Dawid Malan‘s England record is absurd. He has piled on 661 runs, passed 50 in more innings than he has not, and has the highest average in the format ever (min. 500 runs) while maintaining a strike rate of 147.87.

And yet, as things stand, Malan is not in England’s strongest team. Eoin Morgan admitted as much on the eve of the series, maintaining that he saw Jos Buttler, Jason Roy and Jonny Bairstow as his top three with Malan considered primarily as a top-order option.

It is a strange turn of events, and one that illustrates England’s batting depth in white-ball cricket – particularly in top-order roles. “It’s been tough,” Malan said on Monday. “We all know how good the players are that hold those positions.

“Their records over the last four or five years have been fantastic. For anyone to break in, you have to be extremely consistent and win games of cricket for England. I’m obviously aware that guys like Jason [Roy] and Stokesy [Ben Stokes] will come back at some point, and it’s my job to score as many runs as I can in the opportunities I have to put pressure on them and Morgs and the selectors when it comes down to it.”

While his efforts in New Zealand last winter – 208 runs in four innings, including a blistering hundred in Napier – were the most memorable, Malan’s efforts against Australia to date have been his most important, coming on slowish pitches against a world-class attack at a ground with big boundaries. Taking Ish Sodhi to pieces on postage stamps is one thing; holding your own against Mitchell Starc and Pat Cummins is another altogether.

But perversely, there is a sense that Malan’s efforts this summer have demonstrated why he continues to be first reserve rather than first on the teamsheet. He is a slow starter – now notoriously so – and while that is hardly an issue if he continues to pile on the runs after playing himself in, innings of 23 off 23 balls and 7 off 8 against Pakistan exemplified the problem.

Even in the first game against Australia, when he accelerated brilliantly to make 66, his early struggles seemed to force his team-mates to attack, with four of them being dismissed trying to force the pace as he ticked along.

“It’s not something in my gameplan that I want to take five balls or 10 balls [to get going] – it’s just the way it happens,” Malan said. “You obviously go out and want to score as many runs as you can quickly.

“My first three or four T20Is, I got off to really good starts. And when you bat at No. 3, you come in in different positions. You might come in in the first over or the fifth over. You might face a bowler in his second over when he’s in his rhythm.

“There has been a lot written in the press about it, and it’s something I’ve spoken to Morgs about before this series. I said, ‘look, if there’s something you want me to do differently’. And he said: ‘the way you play is exactly how we want you to play – you just keep doing what you’re doing’.

“The man that matters is Eoin Morgan, and if he’s happy with the way I’m approaching it, then that’s good enough for me at the moment. That doesn’t mean I’m not trying to improve on that – I always want to improve, so I can keep pushing a case to be in the starting XI.”

Malan also revealed that he asked Morgan following the series in South Africa whether he would be better served by dropping down into the middle order when playing domestic T20 cricket, but suggested that he had no plans to do so for Yorkshire in the Blast or over the winter – including in a possible Big Bash stint.

“He said: ‘that’s your choice, if you want to take a year out doing something out of your comfort zone but will risk you getting picked for England in the future’,” Malan said. “His words were, ‘if you keep doing what you’re doing and keep improving there’s no reason you can’t potentially slot into those positions’ – even though they see me as a top-four batter at the moment.”

But with a number of left-handers – Ben Stokes, Moeen Ali, and Morgan himself – in those spots, it seems unlikely. Instead, it seems that Malan’s best chance remains as a top-three batsman, hoping that his ability against spin – honed on slow wickets in franchise tournaments – counts in his favour. He will continue at No. 3 in the final game of the series on Tuesday, with Tom Banton set to move up to open.

“You go to Bangladesh and play on a wicket that’s a 200 wicket on the Monday and a 120 wicket on the Tuesday,” he said. “You are consistently learning how to adapt and read conditions which I think is one of my strengths in T20 cricket; that I can assess situations pretty quickly, when to go and when to sit back.

“It’s a good learning curve going out there. If I am lucky enough to play well enough over the next year to get into the T20 World Cup squad, then I hope the experience I have playing in tournaments will put me in good stead.”

THANK YOU to our 2020 Community! — The Learning Scientists